Floating Solar (PV) Systems: why they are taking off

With nearly 3 quarters of our planet covered with water, and more and more people living and feeding from the increasingly scarcer lands, isn’t it a brilliant idea to start using our water surfaces for clean power generation?

With only a handful of players currently focusing on the market of floating solar systems, it seems there’s more to it than you might think.

In this article, we explore the countries where floating solar is taking off, the main players and their different technologies as well as the advantages and implications of installing solar modules on the water surface.

What are the main countries where floating solar systems are installed?

“The Floating PV market is a new growing market. There are many places around the world that do not have available land for PV installations, mainly islands such as Japan, Singapore, Korea, the Philippines, and many others.

Today there is already a demand for Floating PV in Japan, the USA, Korea, Australia, Brasil, India, and others. This demand is expected to increase and will spread all over the world”.

What are the ideal places for floating solar systems to be installed?

We’ve read about floating solar systems being installed at wineries, fish farms, wastewater treatment plants, and so on.

“An ideal match are the water utility companies that are usually heavy electricity consumers that do not have land but have many water reservoirs.“

Also, there’s a good synergy with Hydro-dams since the infrastructure, such as the electrical grid, teams, and roads, is already in place. Solar PV systems installed on the water surface benefit from a significant lower ambient temperature due to the evaporative cooling effect of water. The aluminum frames certainly conduct the cooler temperature from the water as well, bringing down the overall temperature of the modules.

However, the actual performance advantage compared to ground-mounted installations seems to vary due to lots of variables.

We highly doubt the comments made by the company Infratech Industries claiming yields of up to 3 times that of a traditional fixed solar system are possible (Source).

THAT IS a significant difference.

During this comparison analysis, the performance of 3 installations, sized 2.4kW, 100kW, and 500kW was measured. Each system had the equivalent power installed on land, as well as on the water.

Another study to keep an eye on.

The government of Singapore is undertaking the largest side-by-side comparison study of floating PV systems, which is managed by the Solar Energy Research Institute of Singapore (SERIS).

“This SGD11 million project will be held in two phases over a period of 4 years, and in phase one, starting in 2015 will deploy eight floating PV systems, each with a capacity of around 100 kWp. Phase Two, which commences after the PV systems of Phase One have been comparatively tested for several months, will see an expansion by another 2-3 MWp in size. More details can be found on the SERIS website http://www.solar-repository.sg/” (Source)

How about waves and heavy winds?

Floating solar systems will certainly move by waves and heavy winds. The floating PV system needs to be able to withstand these forces of nature.

How do floating solar systems handle waves and heavy winds?

Solaris Synergy’s cable-based structure is able to withstand hurricane-level winds as well. The question is perhaps.. what kind of hurricane? 🙂

Another float or raft membrane developed by Infratech Industries Inc is able to withstand up to 10 meters in water level differential and 2-meter peak and trough waves.

How about floating solar systems on salt water / open sea?

With over three-quarters of our planet covered in water, a logical question step would be the deployment of floating solar energy systems on the open sea. Is this already possible?

Our floating system can stand waves up to 2 meters and can be installed in lagoons or bays.

The problem today with salty water is that the PV modules manufacturers are not ready yet to give warranty for salty water installations.

If the PV module manufacturers are not ready yet to offer decent warranties on modules installed at sea, we may need  ‘military grade‘ modules for ocean projects, or limit the installation of floating solar systems to sweet water lakes for the moment.

What are the effects of salty water on solar modules?

It’s known that Salt Mist Corrosion can affect the lifetime of solar modules that are installed near a coast line.

Manufacturers nowadays offer a special certification too prove that they can produce modules that can withstand salt mist corrosion according to specific standards. This Salt Mist Corrosion standard is the IEC 61701.

As you know from our previous article on the pitfalls and difficulties concerning solar module warranties, the details of a warranty vary greatly and are easily void if modules are not handled and installed as per warranty conditions.

Anything installed at sea needs to be corrosion-proof and apparently, most PV manufacturers of standard solar modules are not confident yet to offer full warranties on modules installed at sea.

…”Limited Warranty” does not apply to any Products which have been subjected to extreme environmental conditions or exposure to corrosion, oxidation”

What are the main players of floating solar systems in the market?

Solaris Synergy’s proprietary technology is different from most rigid contiguous floating platform solutions on the market. Its floating equipment has already reached a cost equivalent to ground-mounted PV systems. The company’s proprietary ‘Grid-Based Solaris Synergy system’ “…enables PV modules to float independently of each other while maintaining a predefined geometrical configuration by means of a proprietary system of tensed cables connected in a spider-web like grid and supported by a rigid floating rim.

Imagine a structure similar to a tennis racquet, where the floating rigid rim is the frame of the racquet, and the grid of tensed cables are the strings of the racquet running lengthwise and width wise. In the squares formed by the criss-crossing strings – the solar modules are placed and are loosely held to the corners of the squares with cables”.
(Whitepaper) Ciel et Terre’s HYDRELIO© floating solar system components consists of patented modular floats that are known for their ease of installation. The system can be put together without any tools. In the past years, Kyocera TCL Solar has been rolling out large-scale PV systems in Japan. Due to the lack of space, and the abundance of unused water surface, the company has been constructing several floating solar PV systems. The company is currently working on a new giant 13.4MW installation, which will be floating on a dam reservoir in Chiba Prefecture.
Other companies doing work with floating solar systems are Infratech Industries Inc and Sunengy (floating CPV),

What are the components/materials used for floating solar systems?

The future of floating solar systems?

One nicely thought out concept that we like to highlight here is the solar-powered Smart Floating Farms (SFF) concept developed by Forward Thinking Architecture.

The concept of an autonomous floating farm was developed as a solution for our future food shortage: with an estimated 9 billion mouths to feed by 2050 and climate change likely cutting a quarter of crop yields, we’ll need new, innovative ways to increase food supplies. The farm is built with a modular-expandable Multi-Layer Floating Farming system and is designed to operate at sea. The Hydroponics, Aquaponics, LED lighting system and desalination equipment will all be solar powered.
Javier F. Ponce, CEO of Forward Thinking Architecture comments:

“There are many areas/dense cities worldwide that can benefit from our Smart Floating Farms (SFF), specifically the countries with land scarcity and massive import related problems, and limited water resources.

For example, the project could perfectly fit in places like Singapore or the Arabian Peninsula countries, and many other countries..”
SINOVOLTAICS: Do you consider building a prototype?

“Yes, it is actually becoming more and more real with time and our progress. We will be glad to comment more when the appropriate time comes.”

Do you have experience with floating solar (PV) systems or a working on a water surface PV system? We want to hear from you, please comment or mail us! 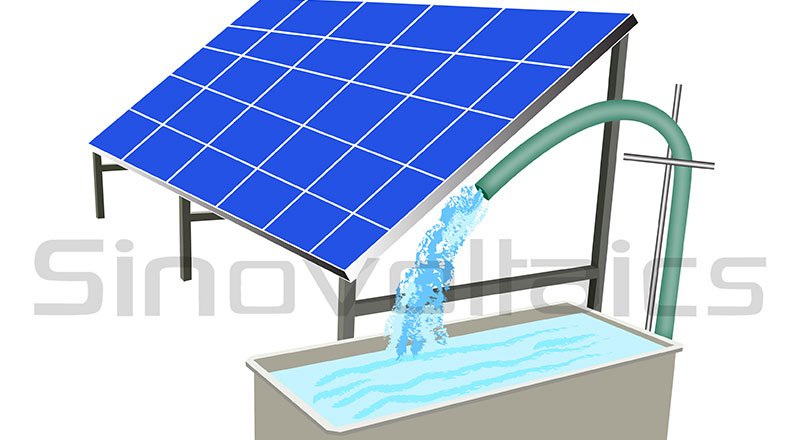 Thanks for commenting Minwoo Kim, good to see you here.

In hotter areas the efiiciency gain will be more than the 11% reported from Korea, also the PV module lifetime will be longer, thanks to the cooler operation above the water.

Have a look at the offshore floating PV technology developped by 4CSOLAR, INC. Our prototype will be installed in Chile next September! http://www.4csolar.com

Thanks for letting us know about 4Csolar's new floating PV technology. It looks different from any of the other floating PV system providers we mention in the article above. Please keep us updated on your latest developments. Would be glad to see how your prototype is launched and how it performs. All best!

Thanks for your good information.

I see a great potential in floating solar panels. I imagine fabricators have already considered using an anticorrosive coating for the metal frames. These coatings are designed to withstand highly corrosive environments and are use on the G&O market and subsea. Then, the other question would be to protect the PV itself.

That's an interesting idea. So far it seems manufacturers are quite reluctant to provide warranty on solar modules installed on the water, especially at sea. Even though Salt Mist Corrosion certification provides a certain degree of assurance that the modules can withstand corrosion in the long run, there's of course few real data available from floating modules installed for long time 'in the field'. The right coatings in combination with certification testing can be the next step for reliable modules that can be used for floating pv systems.

Hello! do you have the dimentions of the floating solar panels please? somenthing as a plan? thanks!

You may want to get in touch with the specialized companies / organizations mentioned here such as Solaris Synergy, Ciel & Terre, Kyocera or the Solar Energy Research Institute of Singapore (SERIS)

I had an idea for this over 25 years ago when I was a kid, now the world is catching up. Now I'm older, I can flesh out my idea with a few more details, but where do I start. Who shall I contact?

Dear sir I have project in Egypt , I need to know more information about floating brackets for solar panels

hi, I need more details about mathematical calculations for FPV

pls mail me at sicunion@gmail.com

pls mail me at sicunion@gmail.com

I would like to focus the attention on other systems: in Italy we have developed the nrg island system from 2010. it works, it is functional and economic. if you would like to understand better our system feel free to contact us at www.nrgisland.com thanks

We (University of Malta) have just concluded a project Solaqua - where we tested various designs in open sea. Our results were encouraging and successful. One of our prototypes is still at sea (since Dec 2014) . We are now planning Solaqua 2 - where we'd like to build a larger prototype and also deploy it at sea. We are focusing on power output and structural design. If you would like to know more or are interested in collaborating please contact me.

Dear Luciano, can you please email me more info?

Dear Luciano, can you please email me more info?

Thank you for this information. Do valuable. I am Nando Purba from Indonesia, we have a project to install 1 MW floating PV in our dam as reservoir for our hydro power plant. Please advice me Mr. Dricus about the floater and PV module and others equipment we need for the project. Thank you very much. Nando