Are We In The Energy Storage Decade?

That’s the question we should be asking ourselves. Two energy outlook reports from BloombergNEF and Wood Mackenzie have recently estimated that Energy Storage market installations will reach 1 TWh (Terawatt-hour) by 2030. That’s roughly 30 times the current installed capacity.

BloombergNEF estimates that Energy Storage market installations will jump from an installed 17GW / 34 GWh by the end of 2020, to a whopping 358 GW / 1,028 GWh by 2030. The estimates from Wood Mackenzie are also in the same range, with a cumulative installed capacity evaluated at 964 GWh by 2030. 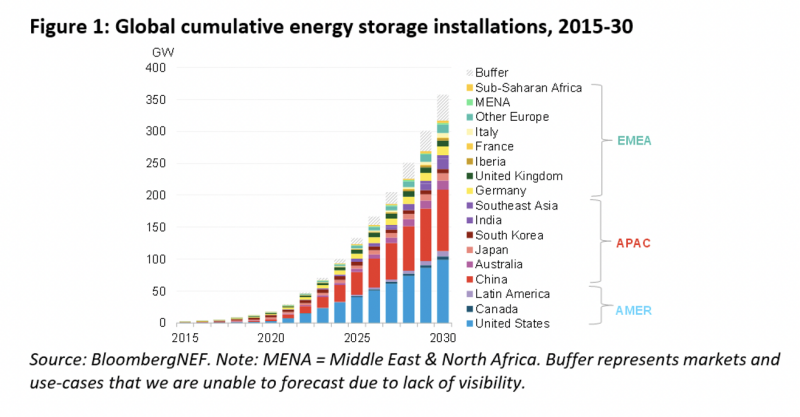 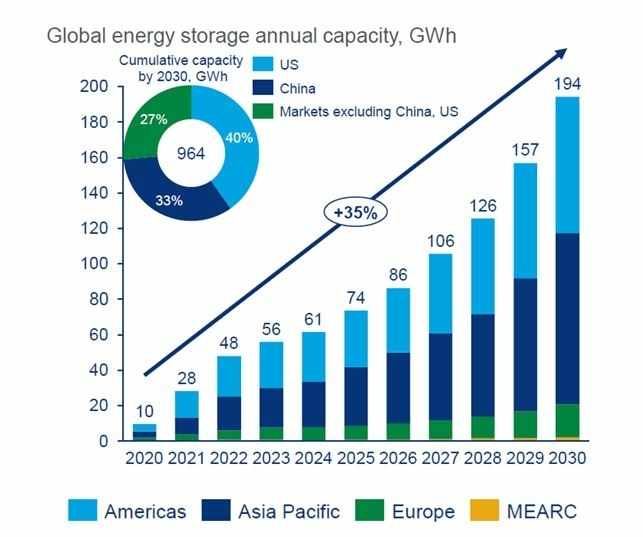 Both reports agree that the United States and China will be the two main markets for Energy Storage installations. The Wood Mackenzie report estimates that the United States will represent 40% of total global installed capacity (around 385 GWh), while China will account for 33% (around 315 GWh). Europe, in the meantime, will see the deployment of 100 GWh by 2030, the equivalent of 10% of total installed capacity.

A rapid technological development and reduction in costs of battery technologies are the main drivers for the accelerating energy storage deployment, according to BloombergNEF. As a result, global lithium-ion battery manufacturing capacity is set to quadruple by 2030 according to the Wood Mackenzie report, as illustrated in the graph below. 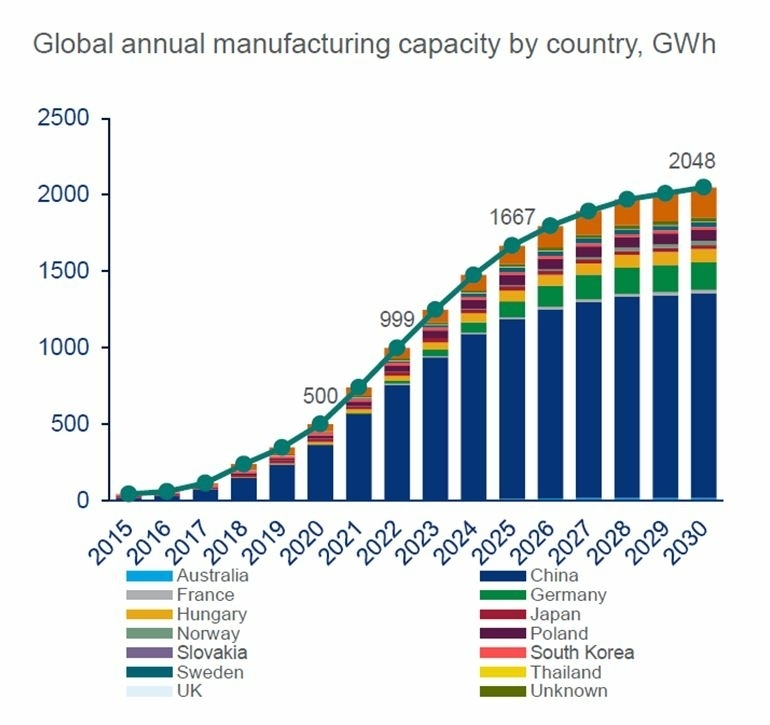 As shown in the graph, Asia Pacific, and particularly China (70-75% of worldwide manufacturing capacity in 2030) will keep a  dominant position in the lithium-ion manufacturing landscape.

Regarding the Lithium-ion battery technology of choice, lithium iron phosphate (LFP) should be the dominant chemistry of the decade. According to BloombergNEF, LFP should replace nickel manganese cobalt (NMC) as the most popular chemistry of choice for energy storage in 2021. BloombergNEF also anticipates further development in the energy storage technologies, with solutions like sodium-ion becoming industrialized and competitive.

What about post-2030? The analysis from BloombergNEF extends to 2050, where it anticipates that Energy Storage market installations will reach 7.7 TWh by 2050; more than seven times as much as in 2030. That scenario will result in an averaged 257GWh of energy storage installed per year to 2050. Based on this, the 2020s may be the energy storage decade to date, but only the first of many to come.