Stages of failure in Lithium-Ion Batteries

Understanding the modes, mechanisms, and stages of loss will help in early detection and possible preventive action. Lithium-Ion (Li) batteries have various mechanisms of failure, and hence, the stages of failure in such batteries also vary somewhat depending on the failure mechanism. However, a broad definition of stages toward failure is possible.

The following four stages can generally be identified: 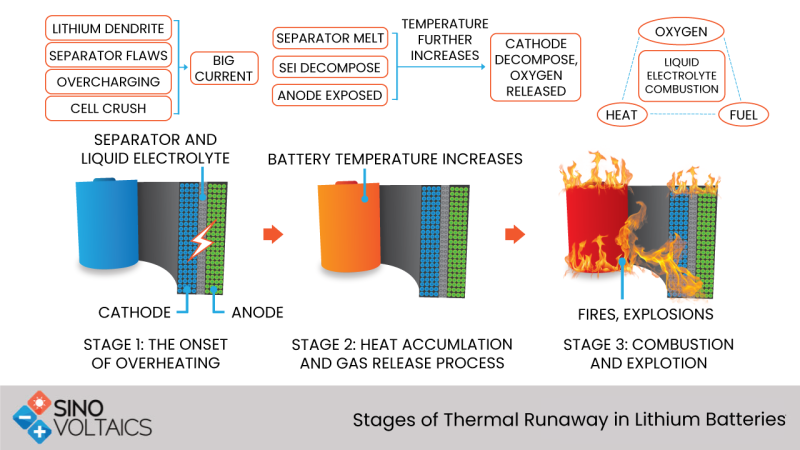 These stages can be described briefly as below:

Assuming a quality manufactured battery, failure will always be undertaken by an abuse factor. Abuse could be:

This stage of battery failure can typically be detected and possibly prevented well in time by a sound battery management system (BMS). The time between the Abuse and the next stage, off-gas generation, will depend on the type of Abuse.

The battery is primarily a chemical object. Any Abuse will modify the chemical reactions happening inside and cause gassing. Gases generate heat and pressure inside the sealed battery, and larger surfaces of the battery will start deforming. That is why a “swollen” battery is a bad battery. The swelling indicates internal gassing. The gas compound is detectible by suitable gas detectors, which are generally not part of the battery management system. Gas detectors would typically be employed during prolonged storage or volume shipping but can be used in parallel with a battery management system.

If no preventive action is taken, the failure mechanism continues to progress. Increasing generation of heat results in what we call a thermal runaway, an irreversible or even un-stoppable process. The end result is fire or material break-up. If a battery is smoking, it is an indication of either a mechanical overstress or failure of the battery management system. In any case, the battery is rendered useless. Further, a battery in such a stage can initiate a thermal threat to other batteries or nearby equipment.

The time from stage 3 to stage 4 is short, and in some cases, it may be virtually zero. As a result, a smoke warning is not always a warning of battery failure but may be used to prevent fire damage to the surroundings.