How Do Bypass Diodes in PV Modules Work?

Individual solar cells produce a nearly constant voltage but put out a current that increases with the intensity of sunlight falling on them. The voltage is low, just over 0.5 volt for silicon cells.  Thus, to obtain practical levels of voltages from a solar panel, individual cells have to be connected in series. Similarly, photovoltaic panels have to be connected in series to raise voltages to the desired levels.

Unfortunately, a series connection is like a one-track rail. If the path is obstructed at any single point, the traffic stops. In an electrical series connection, the same current must pass through all the series elements. If any one of the elements (a cell) opens up the whole series path is open. Consider a series string of solar cells in a solar panel. Current flow out of the string can be no more than the current of the least efficient cell. If one of the diodes in a string malfunctions, the whole string malfunctions. Panel output drops.

Now think of the broken railway track again. What if there happened to be an unused route around the blocked spot? Traffic could continue albeit with some problem. That is how bypass diodes work. Under ordinary conditions the bypass diodes play no part. But if a solar cell becomes dysfunctional or starts developing a high resistance (lowered current output), the series string would be affected, and string current would be no more than the output current of the damaged panel. Now if there were diodes connected suitably across the cell, series current would find a bypass path through them. Thus, other cells in the string will be able to deliver their full power.

Why should some cells malfunction? The most common reason for low output from one or more cells is shading. Solar cells of a given technology, eg silicon, all give a nearly fixed output voltage. But the current output depends on the level of irradiation. As the sun moves, some panels may get shaded and produce less current (but the same voltage). This is like increased Thevenin resistance of that cell.

If the cell were working alone, there would be no problem other than a decreased current output (but at the same voltage). However, when other good cells in the string try to push their full current through the string, the shaded cell will act like resistive obstruction to full current of the string. This cell now wastes the energy as heat. Apart from the waste, a bad possibility is that the heat localized in the cell may damage it permanently.

Bypass diodes of sufficient current capacity are connected in SHUNT with the cells with a polarity such that the cathode of the diode connects to the positive terminal of the solar cell. When the solar cell is delivering, the bypass diode is reverse biased by the voltage output of the solar cell and thus virtually out of the circuit. When the cell resistance increases due to shading (or any other reason), the other cells in series can drive their full current through the diodes without being obstructed by the faulty panels, albeit, at a lowered total output. Thus, bypass diodes not only ensure continuity of operation, but also safety of cells from permanent damage. 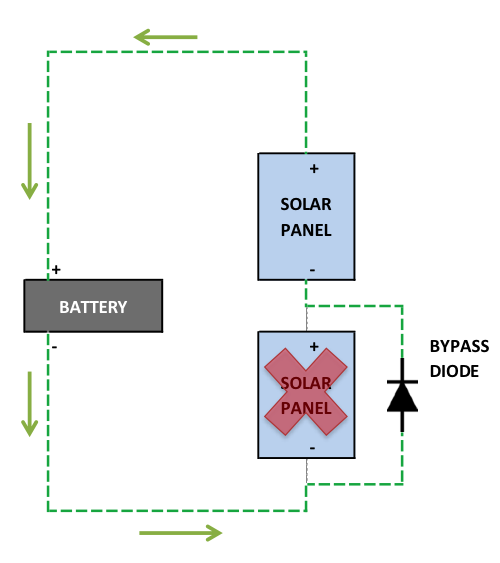 Two types of diodes are available for use as bypass diodes. One is the ordinary PN junction diode with a forward diode of about 0.7 V. The other is the Schottky barrier diode with a much smaller forward drop of 0.4 V. the lower drop allows better power efficiency of the system.

Just as cells are series-strung to get the desired voltage from a panel, panels are also series-strung to obtain higher voltages. Exactly with same logic as used in bypass diodes for individual cells, solar panels in a series string must also be bypassed. Again, diodes are used, but with a higher current rating to accommodate the total current of the panels.

Diodes are also used with series strings of solar panels. However, their function is entirely different. They are installed for blocking reverse currents into a panel string putting out less voltage. They are always connected in series and with a polarity to allow normal current.