What is ingress protection (IP)?

Apart from excessive temperature, dust and water are probably the biggest threat to reliable operation of electrical and electronics equipment. While different measures are in use for temperature control the measures against entry of solids (dust and smoke mostly) and water in liquid or vapor form are specified in different ingress protection standards. Special enclosures are designed for electrical and electronic equipment to provide them protection against such damaging elements at different levels of safety.

Different national and international bodies lay down standards for ingress protection of electrical equipment against these elements. These are necessary to protect a user against vague promotional descriptions, eg, “water-proof”, or “water resistant”. What is exactly meant by “water-proof”? Will it prevent entry of water when exposed to a casual shower, or will it be safe when immersed 200 feet underwater for 48 hours? The standards are an effort to prevent this ambiguity.

For example, an enclosure rated at IP68 in addition to being “dust resistant” can also remain “immersed in 1.5 meters of freshwater for up to 30 minutes“. As another example of clearer specifications, a socket rated to IP22 is safe to an insertion of fingers.  It will also not be damaged or become unsafe when exposed to “vertically or nearly vertically dripping water” under specified test conditions.

International Electrotechnical Commission (IEC) has laid down a set of standards called the IEC 60529. Europe has an equivalent standard with name EN 60529. Britain, which is now out of the European Union had already adopted the same standards with the code name BS EN 60529.

In North America and much of the world follow the IP standards published by the National Electrical Manufacturers Association (NEMA) which defines NEMA enclosure types via NEMA standard 250. While The IEC, EU, and BS standards with number 60529 are essentially the same, NEMA ratings are not directly translatable.  NEMA ratings include additional feature specifications and tests which may include tests such as working under icy conditions. Specification for enclosures to be used in hazardous conditions, knock-outs occurrence for cable connections and some other specifications are also included in the NEMA standard 250.

The German national standard DIN 40050-9 added to the IEC 60529 system with an IP69K  for wash-down applications at high-pressure, high-temperature.  The addition was primarily prepared for road vehicles like trucks and concrete mixers which need intensive washing at high pressure with hot water. However, it also finds application in car wash systems and machinery used in food processing. ISO 20653:2013 Road Vehicles-Degrees of protection later superseded the IP69K. ISO 20653:2013 enclosures are not only dust-tight as in IEC IP6X, but must also withstand cleaning with steam under high-pressure.

The first digit following the letters IP indicates the level of protection against ingress of solid particles or objects of various sizes. Levels zero through six are defined with following interpretations.

The second digit following the “IP” descriptor specifies the level of protection against liquid ingress. Digits 0-9 are defined. A letter “X” in this place indicates no specification, i.e., no test data is available. Meaning of each digit in this place is explained below.

Some standards may use additional letters for more specific information. Here is a list.

C stands for protection against access with a tool

D Protection against intrusion of a wire 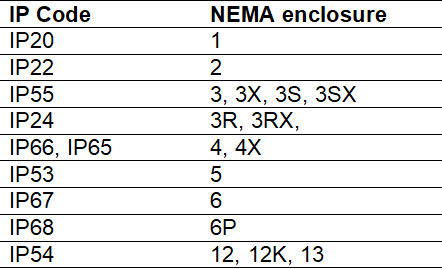