KPK : Kynar-PET-Kynar: what is it?

KPK stands for Kynar-PET-Kynar. And what is that? Where it is used and for what purpose and wisdom? Are there any alternatives to it and how does it fair against the alternatives? These are the things we will discuss, but step by step.

Kynar-PET-Kynar, or KPK is actually one format for constructing a back sheet for crystalline solar panels which have quickly become such an important part of every household and business building. It means a back sheet made of two layers of Kynar lamination sandwiching a layer of PET (Kynar-PET-Kynar) 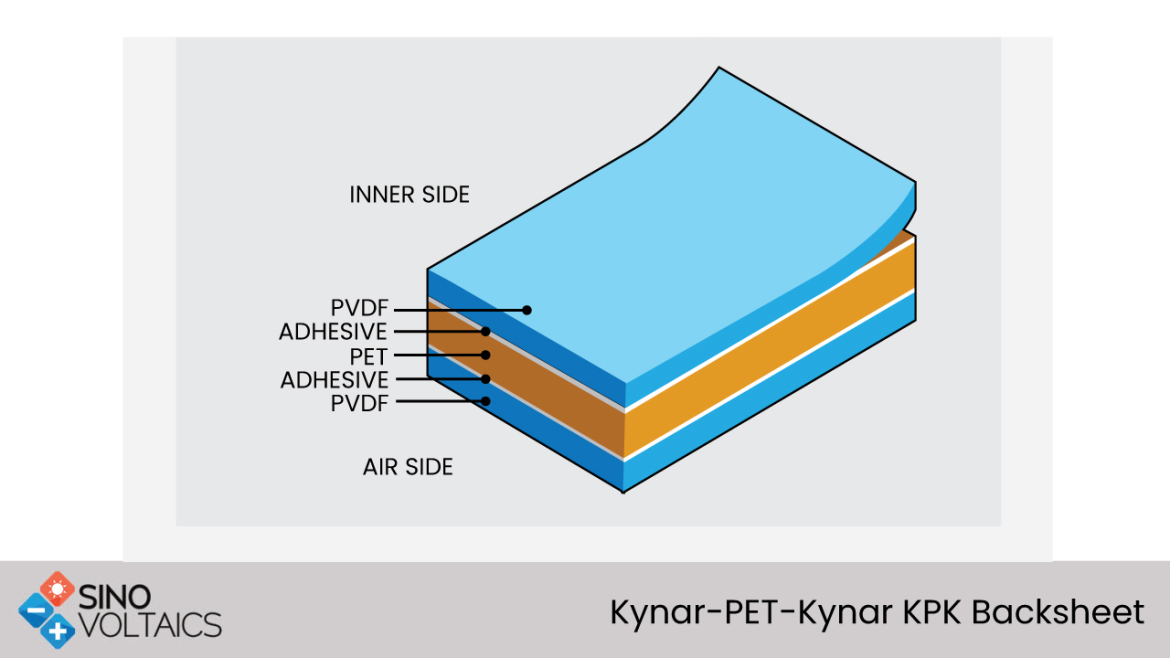 The Back Sheet and Its Importance

The back sheet of a solar panel is like the back of its shirt (but not a stitched part). The solar panel is really structured as layers. The first and the last layers are protective layers. The front layer is one facing the sun and must be transparent to light. It is made of glass. The rear layer normally made up of three layers is called the backsheet.

Economical versions of back sheets will be pseudo sandwich because the bread slice on one side will be missing. That reduces the cost as well as durability of the solar panel. The backsheet need not be transparent except in bifacial (recall Janus, the Greek god who could look forward and backward simultaneously) solar panels. Just as poor clothing in a harsh environment can make humans sick, similarly, a poor quality back sheet will allow elements of nature, especially water vapor to penetrate and make the panel sick. It is often said that back sheets cause more failures of solar panels than any other components. A good back sheet must protect the panel against:

The back sheet itself must:

In case of a bifacial solar panel, the back sheet must also be transparent because light must be able to enter from both sides.

Back sheets used on solar panels are normally three-layer symmetrical sandwiches of special plastic materials (polymers) chosen and assembled to give as much of the desired properties as possible.  There can be three broad types of back sheets used in solar panels:

A new trend is to use glass as a back sheet, but plastic back sheets will continue.

Fluoropolymers are of two types. The polyvinyl fluoride (PVF) and the poly vinylidene fluoride (PVDF). Most common representations of the two types of polymer materials are Tedlar, and Kynar. Tedlar is a trade name used by the US chemical giant company Dupont for its thermoplastic fluoropolymer material polyvinyl fluoride (PVF). Since Tedlar is covered by a patent owned by Dupont, only back sheets using Tedlar on the outside of PET can be called TPT.

Kynar is the trade name of another upcoming fluoropolymer. Kynar patent is owned by Arkema of Columbus in France (not Columbus In USA!). The chemical name is polyvinylidene fluoride.

Tedlar by Dupont is not a new material. It came on the market in the 1950s. Originally it was developed a weather-proofing material and was used in a lot many other products other than the solar back sheets. An earlier trade name Teslar was later changed to Tedlar because of conflict with another German product. Dupont make very confident claims on their website. According to the material present there, a worldwide survey has revealed that Tedlar-based solar panels showed just 0.05% defect rate which was much lower than other types.

In comparison, they claim, PA types showed 45% defects. No such survey results were found about Kynar, but a neutral technical website named MakeItFrom.com does make a comparison between PVF and PVDF, which include Tedlar and Kynar respectively. According to this PVDF (Kynar) compares with PVF (Tedlar) 75 to 90 Mpa (unit of pressure) in Flexural Strength; 180 to 100 J/m in Impact strength; 49 to 65 MPa in Tensile Strength, 440 to 360 ◦C in decomposition temperature, etc.

While Tedlar seems to be comparatively superior to Kynar, the fact that increasing demand for PV panels creates a price and availability pressure on Tedlar, and a close alternative is welcomed by the market.

Film constructions consisting of three layers are primarily used for photovoltaic backsheets and have been used in one form or another since the early 1960s, when Dupont’s Tedlar (polyvinyl fluoride) was the film of choice. Tedlar was first developed as a residential siding material, where it was shown to be able to withstand all of the elemental challenges of the outdoors and quickly became the “go-to” film for backsheet applications (along with a 25-year warranty). The evolution of these backsheet constructions started with a film sandwich, so to speak, consisting of two layers of the Tedlar material with a layer of PET in between. While it was thought that two layers were better than one, it also proved to be more difficult to engineer and more expensive to produce.

Higher demand for backsheets means an increase in the demand for higher performing, less costly materials. Some of the available films include: