The photoelectrochemical cell can be one of two distinct device classes. One produces electrical energy in the same way as dye sensitized photovoltaic cell, which meets the standard photovoltaic cell definition. The second uses incident light on a photosensitizer or aqueous metal submerged in an electrolytic solution to cause a direct chemical reaction as a photoelectrolytic cell, as production of hydrogen through the electrolysis of water.

Both  types are variations of solar cells, as the basic function of photoelectrochemical cell is to use the photoelectric effect (or the photovoltaic effect) to convert electromagnetic radiation (mainly sunlight) directly into electrical energy, or into another form which can then be readily used to produce electrical energy. 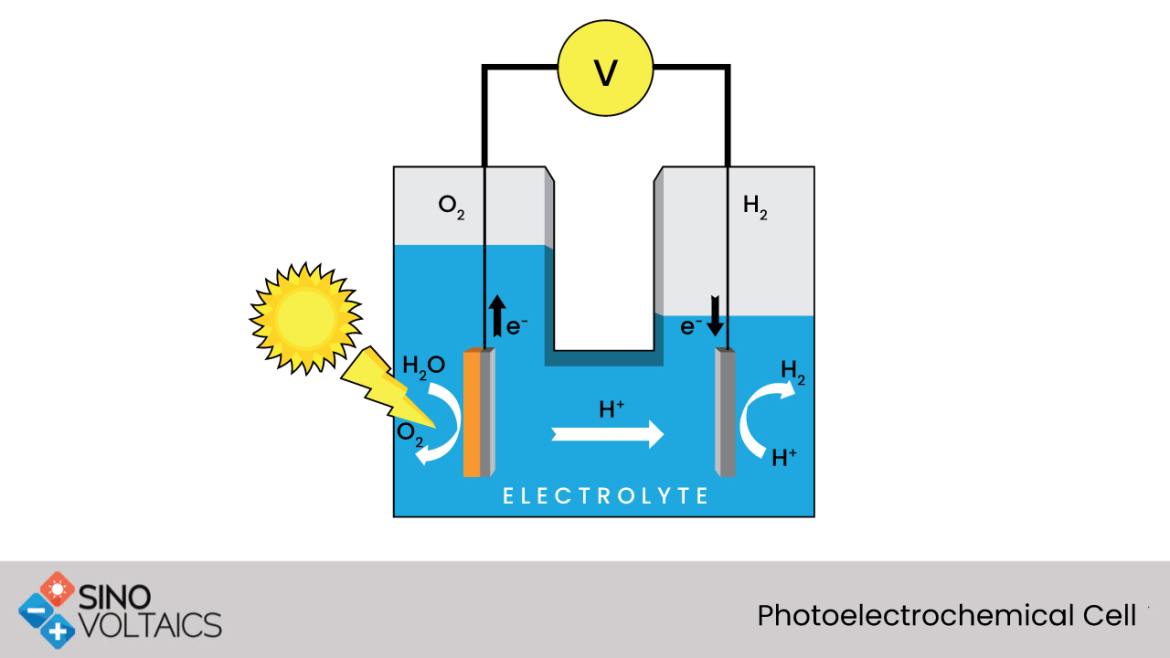 The typical pv effect, as observed in standard photovoltaic cells, entails the excitation of electrons (negative charge carriers) in the semiconductor medium, and the free electrons which are ultimately extracted to produce power. This arrangement of photoelectrochemical cells includes the Grätzel cells which meet this narrow definition, albeit the charge carriers often being excitonic.

On the other hand, the situation of photoelectrolytic cell is quite different. As an example, in the water splitting photoelectrochemical cell, the excitation of electrons in a semiconductor by light leaves a hole that draws an electron from a nearby  water molecule.

Another form of photoelectrolytic cell is the photosynthetic cell , in which the output is carbohydrates not molecular hydrogen.

The water splitting photoelectrolytic cell can electrolyze water into oxygen gas and hydrogen by irradiation of the anode with electromagnetic radiation (light). This process is defined as artificial photosynthesis and is considered one of the ways for storing solar energy in hydrogen form for use as fuel.

Photoelectrolytic cells passed the economic efficiency barrier of 10 percent. Corrosion of the semiconductors still remain an issue due to their direct contact with water. Research is still ongoing to reach a target service life of 10000 hours, which is the established requirement by the United States Department of Energy.