Flywheel energy storage (also referred to as FES) works by accelerating a flywheel (rotor) to a really high speed and maintaining this energy within the system as rotational energy. When the stored energy is extracted from the storage system, the rotational speed of the flywheel is reduced as a result of the principle of the conservation of energy; while adding new energy to the system respectively leads to an increase in the rotational speed of the flywheel.

Advanced Flywheel energy storage  systems contain rotors which are made of carbon fiber materials made with high strength properties, which are suspended using magnetic bearings, and rotating at speeds ranging between 20,000 and over 50,000 rpm in the vacuum enclosure. The advantage of such systems is that they can reach their speed very quickly – thus reaching their energy storage capacity much more quickly than some other forms of storage. 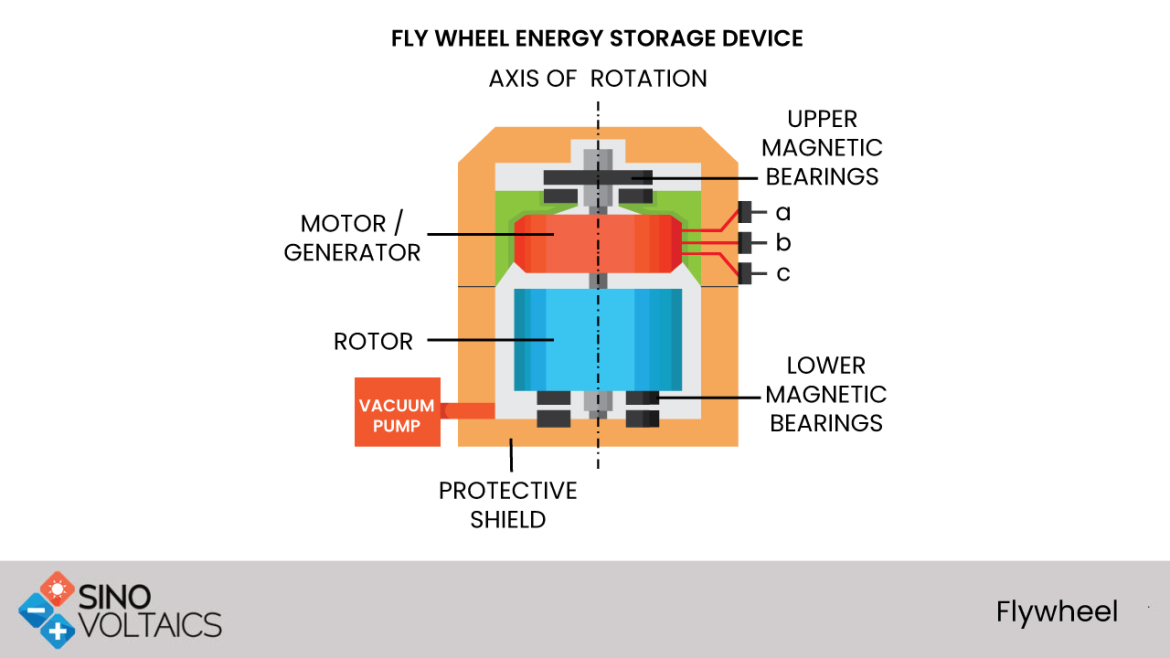 A common Flywheel energy storage system consists of a rotor which is supported by a bearing element that is connected to a motor generator. The flywheel and occasionally the motor generator can be enclosed in a vacuum chamber that is used to reduce any friction and decrease energy loss.

Use of Flywheels in Solar Energy Systems

The batteries are one of the biggest problems for any off-grid solar electric system management. The requirement for ensuring lead acid batteries regularly reaches and maintains a 100% state of charge to avoid  being daunting. Maintaining this 100% state of charge often involves wasting produced PV power during the absorption stage so as to guarantee the voltage does not drop too low. Without using a very smart management system this will certainly lead to wasted amps.

Professional flywheels which are aligned parallel to the axis of rotation of the Earth have equivalent energy storage capabilities to that of lead acid batteries, but with almost limitless cycling capability and no requirement to reach 100% state of charge before discharging to prolong service life. There is no need for checking weather forecasts to plan the energy usage the night before, the stored power in the flywheel can just be simply withdrawn.

This technology has some inherent dangers like explosive destruction because of over speed or other manufacturing defects which can be avoided in large scale FES system by embedding them to the ground.

FES storage systems using mechanical bearings can lose from 20% to 50% of their stored energy in a duration of two hours. The majority of the friction leading to such energy loss occurs because of the flywheel changing its orientation because of the rotation of the Earth. This effect of change in orientation is resisted by the gyroscopic forces which are exerted by the angular momentum of the flywheel, therefore applying a force against the mechanical bearings. This force leads to an increased friction force. This effect may be avoided by aligning the axis of rotation of the flywheel parallel to the earth’s axis of rotation.

On the other hand, flywheels using magnetic bearings and high vacuum nearly maintain 97% mechanical efficiency, and 85% round trip efficiency.