Why Store At All?

Compressed air energy storage (CAES) systems are a very promising technique for storing excess energy. Storage is, of course, necessitated by the fact the availability cycles of renewable energies have very significant daily and seasonal variation patterns in addition to a large randomness due to weather unpredictability. The grid demand cycle also has marked daily and seasonal variations, in addition to occasional sharp peaks and outages. Since the two patterns do not match, there is a strong need for energy storage but a type of storage which can react to demand changed very fast. It is here that CAES systems are justified in preference to the traditional Pumped Water Energy Storage. Pumped water storage needs the presence of two  water  reservoirs with a good height differential. The operating fluid for CAES is air which is ubiquitous.

The basic principle is that available energy is used to compress air- a free commodity- to above 70 bar (seventy times the normal air pressure) and stored away. When needed, the compressed air is fed to a turbine which regenerates energy.

Practical issues arise due to the fact that compression of air (or any gas) is accompanied with a rise in temperature according to the well-known laws of physics taught at college. With the type of compression used,  air temperature can rise as high as 900K (627 C). Although a high temperature would be desirable at the input of a turbine at the time of converting the pressure energy into electrical power; it is not suitable for storage. The compressed air to be stored must be brought to a temperature close to the ambient temperature.

But there are a number of of important variations in this process which result in significantly different storage schemes yielding widely different round-trip efficiencies. The main difference among the various CAES schemes arises in the manner in which the heat of compression  is removed and further handled.

Conventional compressed air energy storage systems simply remove this heat energy and discard it. An obvious and direct result is loss of energy meaning a decreases round-trip efficiency. When energy is to be recovered, the stored compressed air will further cool and must be provided with external energy (which could even come from fossil sources) to bring it to a temperature suitable for the generating turbine. A process in which system energy is not preserved is called a Diabatic thermal process.

An improvement on the conventional CAES is the adiabatic compressed air energy storage (ACAES). The heated up air is cooled at intermediate steps and the removed energy is preserved in an insulated thermal energy system (TES) to be reused at the time of expansion. This improves the efficiency as little or no external energy has to be added at the time of expansion (adiabatic process).

The Isothermal CAES is a step further. In an ideal isothermal CAES, the expansion and heat removal is so controlled that temperature of the air remains constant. “Iso” stands for same or equal, and “therm” for heat or temperature. The reverse process must also be similarly controlled. This would mean a very effective heat exchange system which removes heat continuously as it is generated. The effectiveness of a heat exchange system depends, among other factors, on the temperature difference and the exchange surface area. Thus, practical isothermal heat removal systems would have large heat exchange areas for efficient and real time extraction of heat. Controlled water sprays have also been proposed as means of keeping the temperature constant. 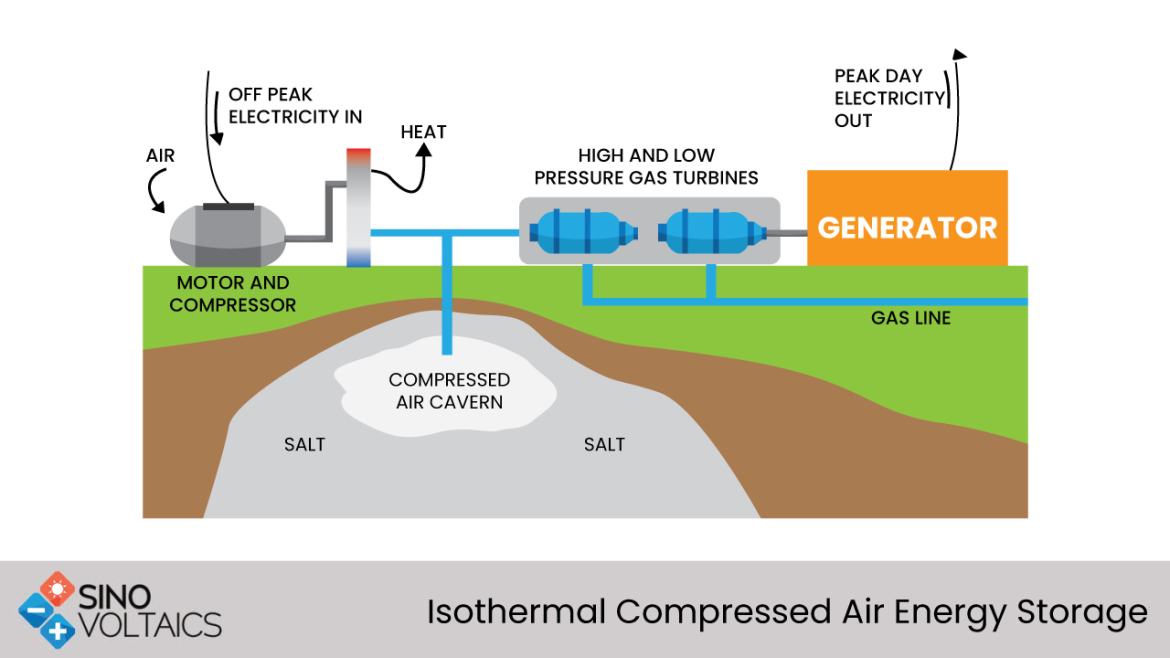 Benefits of the Isothermal CAES

The isothermal CAES will allow more than double the compression allowed by ACAES and reduce the storage cost to about one-seventh of the cost in case of conventional CAES. The round-trip efficiency of an isothermal CAES should theoretically reach 100%, but practical handicaps limit it to about 80% which is still very good and better than the adiabatic CAES.