Stages of The Thermal Runaway Process in Lithium Batteries

The article below introduces the Thermal Runaway Process in Lithium Batteries in four stages. If you have studied basic electronics, you must be familiar with the avalanche phenomenon in semiconductor diodes. A thermal runaway is a heat avalanche. When talking about lithium-ion batteries, the most common source of thermal runaway is misuse-electrical or thermal. Excessive overcharge will produce excessive Joule (I2R) heat. When the temperature at a specific spot rises to a point where the battery materials can start to react and additionally generate self-heating, it initiates an uncontrollable heat generation process or thermal runaway. The thermal runaway process in lithium-ion has three distinct parts, leading to destruction as the fourth and final stage. 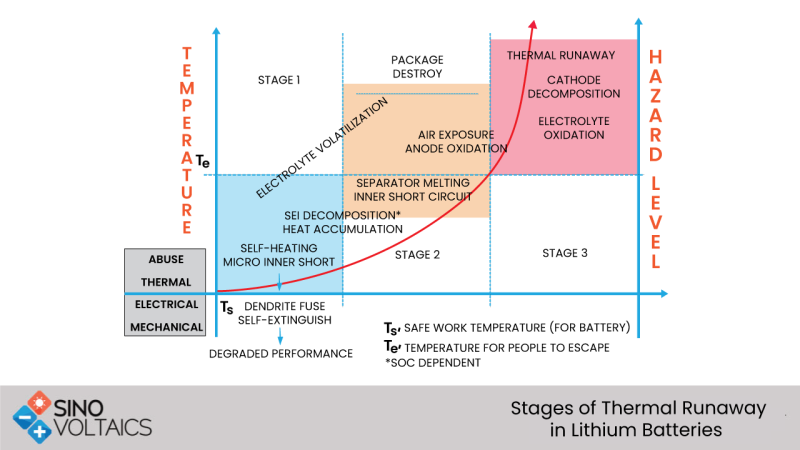 Under electrical abuse, e.g. overcharge, and thermal abuse, the Joule heat is more or less constant until the battery temperature rises above a temperature called the onset temperature T-onset. That is stage 1.

Decomposition of the Solid-Electrolyte Interface starts exposing the reactive portion of the anode to exothermic reactions with the electrolyte. As the electrolytes are reduced at the anode due to the deteriorating SEI, they simultaneously oxidized as well. This is the stage where self-heating becomes prominent (higher than, say, 0.2C/minute) and rises almost linearly with the increasing temperature. If this heat is not dissipated by the battery structure, the elevated temperature will cause increasingly severer exothermic reactions. The rate of the self-heating increases linearly as a function of the temperature itself. On a plot of the self-heating rate vs temperature, this region shows up as a Ramp - it is called the ramp or acceleration region. The reaction causing this accelerated heat generation depends on the state of charge and the chemistry of battery’s materials. In this stage, venting and smoke may also be observed. Timely intervention may arrest the reactions, and it is possible to avoid Stage 3, Thermal Runaway. Once Thermal Runaway has started, it can’t be stopped, and the occurrence of thermal runaway may take minutes or even hours or days[i] depending on the battery design, materials, and the operating environment.

Further heating up causes the cells to enter into Stage 3 or Thermal Runaway. The cell temperature starts rising rapidly due to the higher rates of cathode and anode reactions that are fuelled by the rising temperature in a self-propagating process. Internal arcing, flame or rapid breakdown of materials may occur. As a loose definition, thermal runaway occurs when the rate of self-heating is 10°C/min or higher. At this high self-heating rate, no preventive intervention is likely to be effective. The temperature at which the thermal runaway is called the Runaway Temperature, T(runaway) - it depends heavily on the cell size, cell materials, and the cell design - may vary from about 130°C to over 200°C in lithium batteries. Cathode materials tend to release oxygen at elevated temperatures and have even higher reaction rates.

Thermal runaway will invariably result in the destruction of the battery.