Mismatch for Cells Connected in Parallel

Mismatch happens when interconnecting solar cells of different parameters. Mismatch can describe the variance in performance between individual solar cells in an array.

Panels can only be connected in two ways – parallel connection or series connection. The current (amperage) is additive, when connecting solar panels in parallel, but the voltage stays the same. For example, when connecting 4 solar panels in parallel and each panel is rated at 12 volts and 5 amps, the entire array would be 12 volts and 20 amps. Parallel circuits have several paths for the current to move. 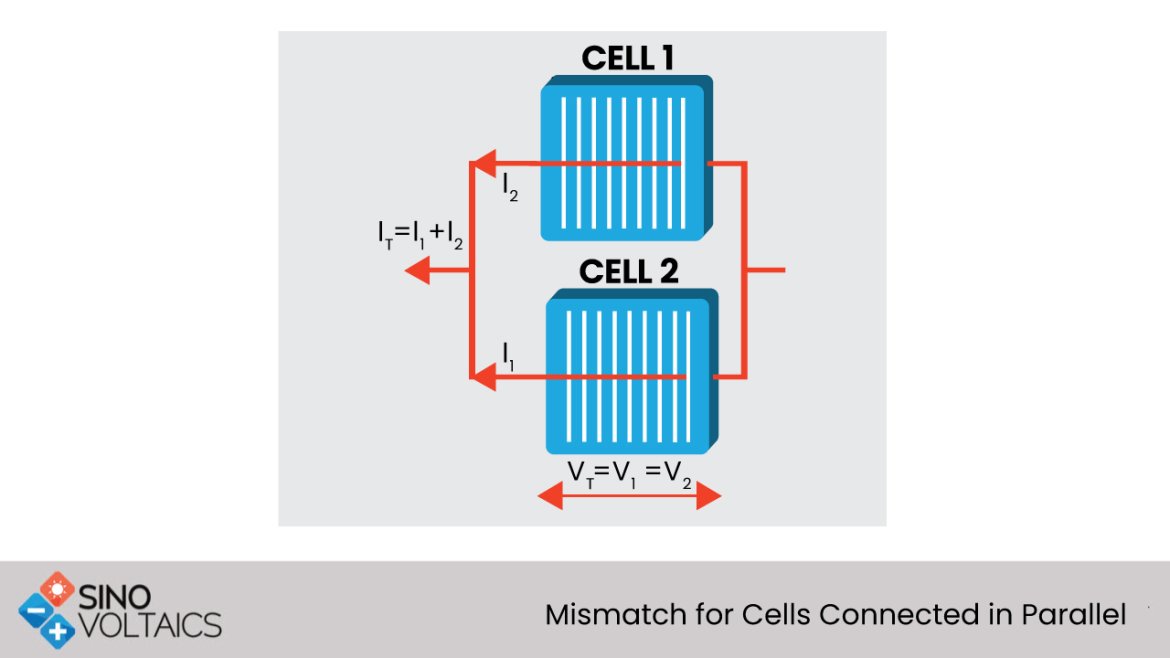 In small solar modules, the solar cells are usually connected in series so parallel mismatch is not an issue. Solar modules are connected in parallel in large arrays so the mismatch usually applies at the module level rather than at the cell level.

For solar cells or modules connected in parallel:

From the above information, it is clear that for connecting solar panels in parallel, the solar panels must have the same voltage, otherwise the total voltage of the array will drop. Yet, for the current (amperage) it can be different as the total current is the sum of the currents in individual panels.

So the mismatch for solar cells connected in parallel is primarily concerned with connection of cells which have different voltage rating as it can cause a significant drop in output value.

Solutions for connection of Mismatched solar modules in parallel

Now, in case we have dissimilar solar panels, having two different sizes, the optimum solution, for charging one single battery bank, is for each of the solar panels to have their own charge controller.

The other option is to take a number of solar panels and wire them together so as to equal the same output of the other mismatched panel. For example, if we have a 100W and 24V rated panel and a number of 50W, 12V rated panels. We can then wire the two 12V panels in series connection (plus to minus) and then we can wire the combination in parallel with the 24V panel. Then we will not have to worry about the lower voltage 12V panels causing the total produced voltage to drop down, which would have happened if we directly connected the 12V panel in parallel.

0 thoughts on “Cells Connected in Parallel”