Dricus
Solar cells
Share
Share
Share
Share
The MWT solar cells (Metalization Wrap Through)  is a really promising concept of back contact solar cells, because when using electroless metallization the extra effort needed for MWT processing in comparison to conventional buried contact cells is restricted to the formation of the small number of holes. Also adding to this, the MWT concept can easily be applied to extremely large areas.

There are several existing cell designs that incorporate the advanced laboratory features of solar cell technologies. Two approaches which have been widely used in niche markets like solar cars are the University of New South Wales produced PERL cells, and Stanford University and SunPower produced rear contact cells. The Rear contact solar cells can potentially achieve higher efficiency by moving all of the front contact grids – or part of it - to the rear of the device. The potential higher efficiency is due to the reduced shading on the front of the cell and is specifically useful in the high current cells like concentrators or large areas. There are various Rear Contact Solar Cell configurations, with MWT (Metalization wrap through) being one of them 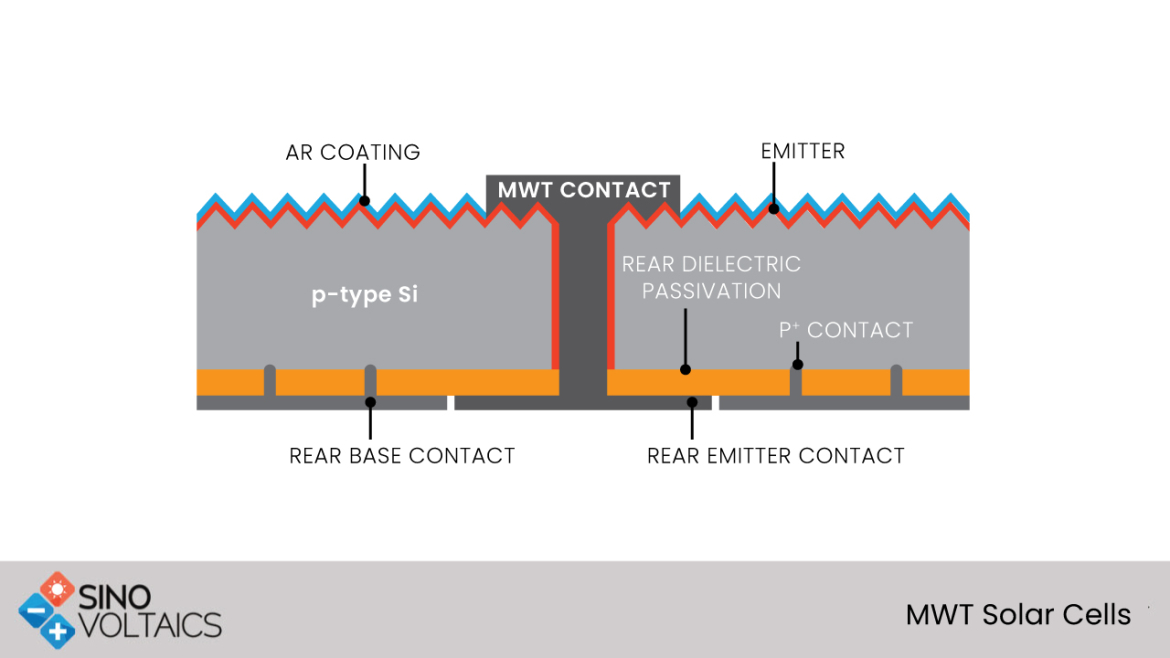 In the MWT technology, the front side metallization is contacted through interconnects to the back side of the cell. The main advantage of this MWT technology is how it can be integrated by introducing an additional single process step, which is via hole formation. In comparison to the standard solar cells production, there are different process stages of Metal Wrap Through (MWT) solar cells, which partly moves the front side contacts over to the rear side, resulting in reduction of the front side metallization by almost 50 %. First step, a laser is used for drilling holes into the cell. The through connection of the cells is achieved simultaneously by the subsequent silkscreen printing process for producing the rear side contacts. By doing this, the silk screen printed paste is used for filling the freshly created holes, as a result creating the electrical connection to the front side. Contrary to the normal processes, the isolation of the contacts decreases extra associated costs. The rear side contact of the MWT solar cells requires minor modifications to the standard process and the resulting minimization of metallization on the front side leads to reduced shading and therefore increased energy production that leads to substantial increase in efficiency.
Place comment