The micromorph cell is a thin film solar cell that is based on the multijunction architecture consisting of two solar cells which are stacked on top of one another. The function of the two solar cells is that the top thin amorphous silicon cell absorbs the blue light, while the thicker bottom microcrystalline silicon cell absorbs the red and near infrared light, which allows the tandem cell to cover a whole wide range of the solar spectrum.

The micromorph cell contains a μc-Si:H based cell as the bottom cell, while the top cell consists of amorphous silicon. An efficiency of 10.7% is reported. Currently, all solar cell theories that are based on thin film crystalline silicon still have the problem of long manufacturing times that needs to be overcome.  A solution for this problem can be achieved by plasma depositing of μc-Si:H, for combined argon/hydrogen dilution of the feedgas. 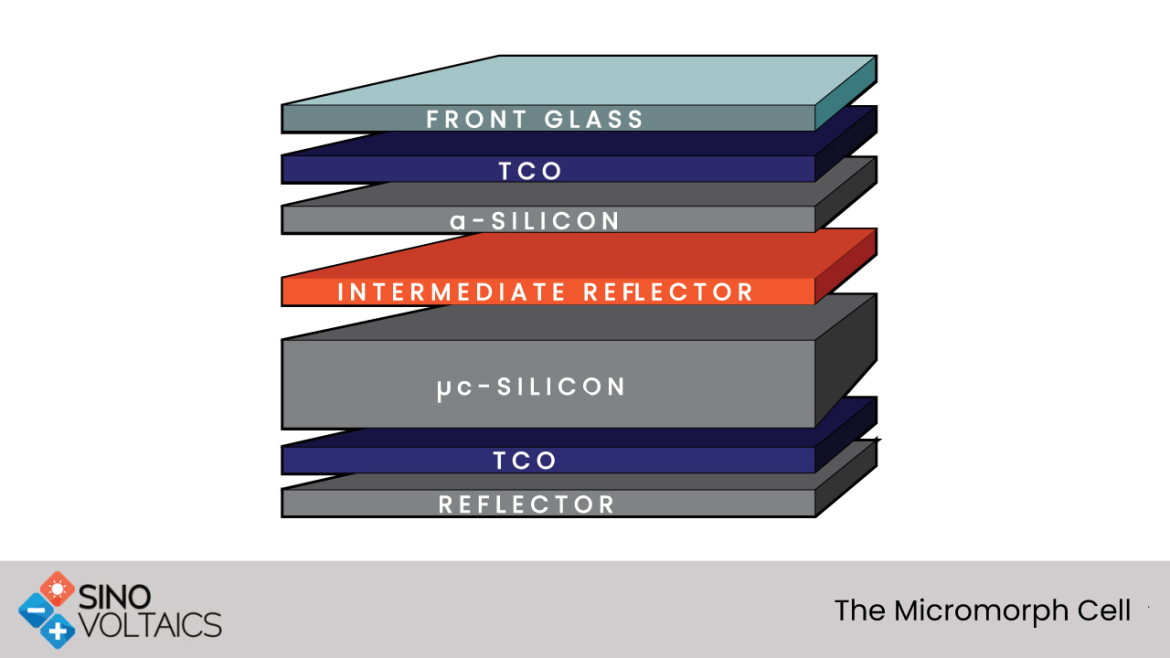 The band gaps of microcrystalline Silicon (equal to 1.1eV) and amorphous Silicon ( equal to 1.7eV) are properly suited for tandem solar cells, and the Shockley Queisser limit of this cell can lead to conversion efficiencies that nearly reach 30%. This number can not be reached in reality and common efficiencies are around 9%. This number is beyond the known stable efficiencies of the single junction thin film silicon solar cells which is normally in the range of 6%. One of the reasons for the low costs of thin film silicon solar cells is that it has a very low thickness that is around 2 µm in comparison to 200 µm for silicon wafer. In the range of red and infrared wavelength, light trapping is required as the 2 µm of silicon is not enough to absorb all light.

Advantage of the micromorph cell

The advantage of the micromorph approach is that it maintains the thickness of the top  amorphous cell low. This leads to reducing the degradation effect induced by light (Staebler-Wronski effect). In the multijunction cells, both top and bottom cell have to produce the same current. But the top cell has a limitation due to the Staebler-Wronski effect and thus light trapping and the intermediate reflector are required for keeping the  top cell thickness low while increasing its current.

The IRL – intermediate reflector layer– is a layer between the top and the bottom cells. Since the lower refractive index which is around 2 in comparison to 4 for the surrounding silicon, light is reflected back to the top cell. This leads to an increases in the top cell current to 12mA/cm^2 (instead of 10mA/cm^2), but reduction in the bottom cell current by an equal amount.

0 thoughts on “The Micromorph Cell”